Here are some recommendations for making scientific graphics which help your audience understand your data as easily as possible. Your graphics should be striking, readily understandable, should avoid distorting the data (unless you really mean to), and be safe for those who are colourblind. Remember, there are no really “right” or “wrong” palettes (OK, maybe a few wrong ones), but studying a few simple rules and examples will help you communicate only what you intend.

What kind of palettes for maps?

For maps of quantitative data that has an order, use an ordered palette. If data is sequential and is continually increasing or decreasing then use a brightness ramp (e.g. light to dark shades of grey, blue or red) or a hue ramp (e.g. cycling from light yellow to dark blue). In general, people interpret darker colours as representing “more”. These colour palettes can be downloaded from Color Brewer. 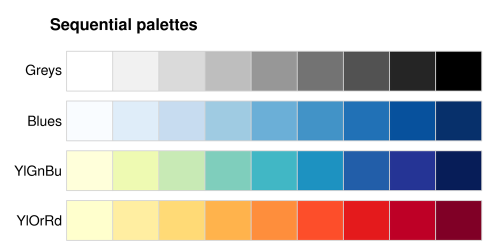 Here is a great example from the NOAA climate.gov site. It shows a map of precipitation, with darker regions representing greater values. 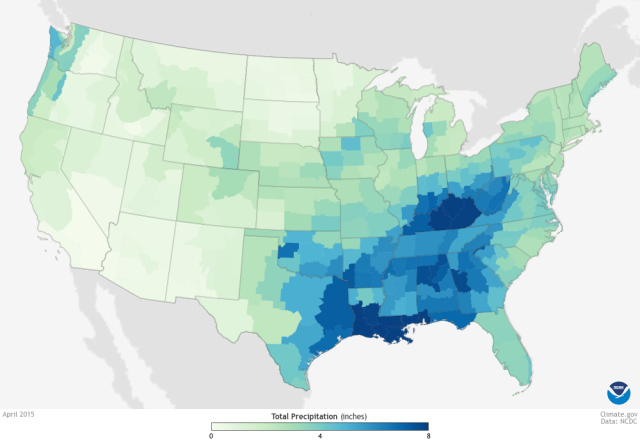 A map of precipitation with a sequential lightness-hue ramp from climate.gov.

If the data are diverging (i.e. the data straddle zero, or show a departure from a reference value) then use two contrasting hue or brightness ramps stuck together. These often have the darker colours at each end, representing “more negative” and “more positive”. 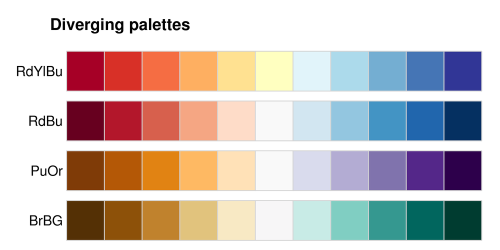 Some diverging palettes from Color Brewer

Here is another example from NOAA. This one shows a probability map, showing where the USA is expected to be warmer or cooler than usual. In this case, we can easily check a numerical value, as the colours are few enough to check against the legend, and the map uses contours. 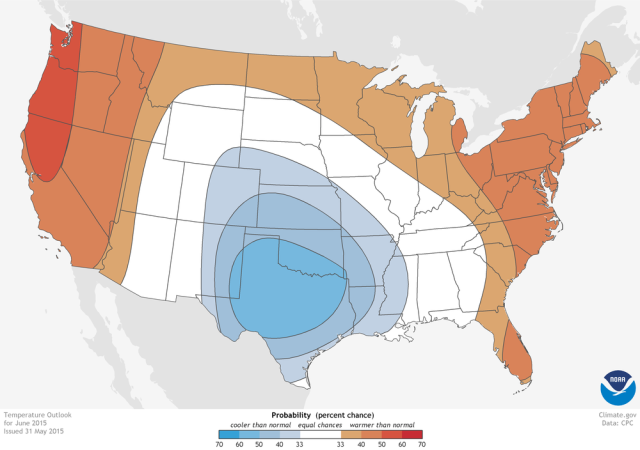 A map of probability of temperature anomaly from climate.gov.

A diverging palette can also sometimes be appropriate for sequential data, to highlight gradients (also see CoolWarm by Moreland).  Here is a final example from NOAA, looking at the temperature of the USA. The colour scale runs across a range of temperatures that people are familiar with. 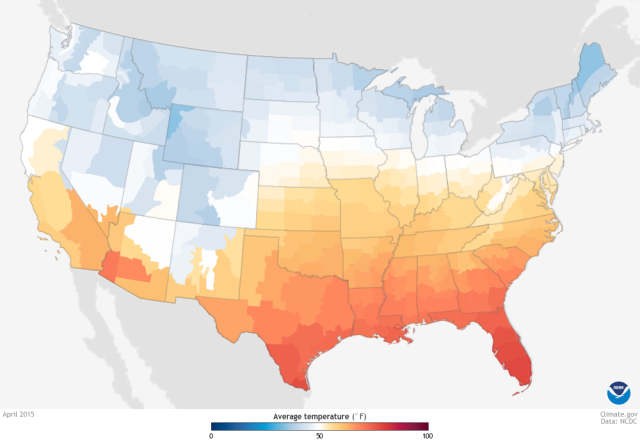 For maps of categorical data without an order, use a palette without an obvious order. Make sure that the colours are easy to distinguish, and colourblind friendly as far as possible. Try to avoid using too many categories, as this can make graphics confusing. Be warned! Some of these palettes are not colourblind safe. 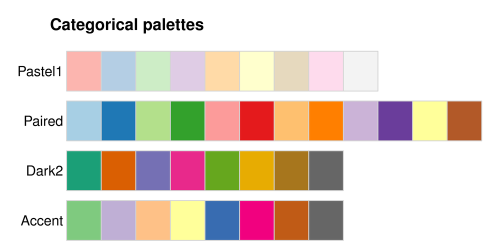 Here is an example of a categorical map, taken from the US census of 2000, with Cynthia Brewer (of ColorBrewer fame) one of the authors. It uses a small set of colours that are easy to distinguish. 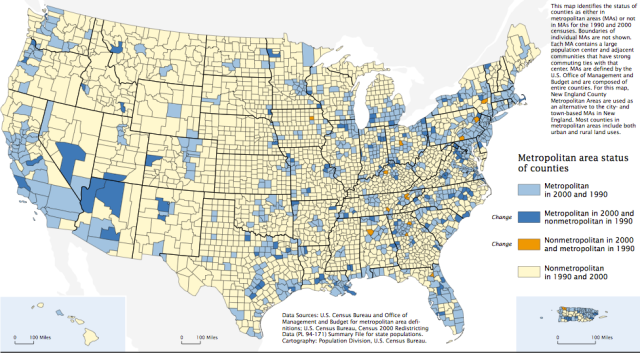 A example categorical map from the US census of 2000.

Try to ensure that your palette is accessible to those with colourblindness. Especially avoid using red and green together, as these are difficult to distinguish for those with the most common forms of colourblindness – about 8% of the male population and 0.5% of the female population. The diagram below from Ed Hawkins at Climate Lab Book, shows a simulation of a severe form of colourblindness (deuteranopia). There are a number of websites and apps that allow you to check how your visualisations will appear to those with colour blindness. If in doubt, remember that red and green should never be seen – at least not together. 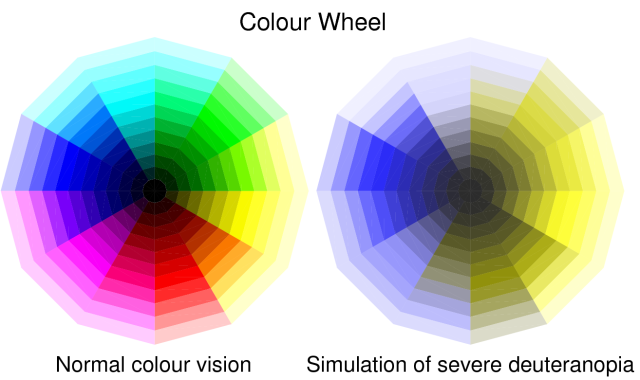 A simulation of severe colourblindness.

There is a great example of a colourblind friendly categorical palette in this paper by Okabe & Ito (2002).

Most visualisations benefit from a perceptual palette – one where the perceived values in a visualisation closely match the data. For example, steps in the data should be represented by matching perceptual steps in the hue, or lightness of the palette. Some palettes, for example “rainbow” or “spectral” palettes, do not have this property. Yellow, for example is special – it will stand out, especially against a dark background, as the human eye is particularly sensitive to that colour.  Yellow is best used where you wish to highlight data. These palettes can introduce thresholds in the data where none exist, or hide thresholds that do exist. Here, for example are the perceived lightness (L*) plots for two different palettes, from MyCarta. The upper palette has many jumps, whereas the lower palette has a smoother, more linear profile. 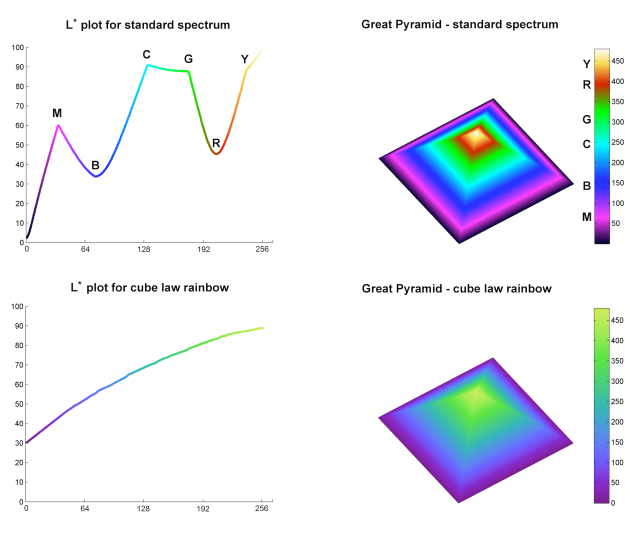 A spectral palette, versus one with better perceptual qualities.

Sometimes, a visualisation can benefit from using a spectral palette to highlight an important part of the data, or to split the data into categories. Understanding when this is appropriate will help your viewer understand the data. Many colours have widely culturally agreed meanings: red is associated with hot, stop or danger, whereas blue is associated with cold, rain or wet. Choose culturally appropriate colours where possible.

End of the Rainbow

Don’t use a “rainbow” or similar palette if you can avoid it.

A “rainbow” or “spectral” type palette.

Rainbow palettes can be useful – they can allow viewers to check values against the legend, and highlight small differences between features. Rainbow palettes combine several of the problems mentioned above – they use both red and green, place yellow in the upper mid-range rather than the top, and introduce perceived sharp transitions in places where none exist in the data, or hide them where they do exist. See Borland & Taylor 2007 for some great research on the problems with “rainbow” type palettes. You can see many of these problems in this map using a “rainbow” type palette, taken from a paper and spotted by Eager Eyes. Although it looks as though there is a huge east/west step change in the centre of the USA, a look at the legend reveals that the transition is in fact quite smooth. 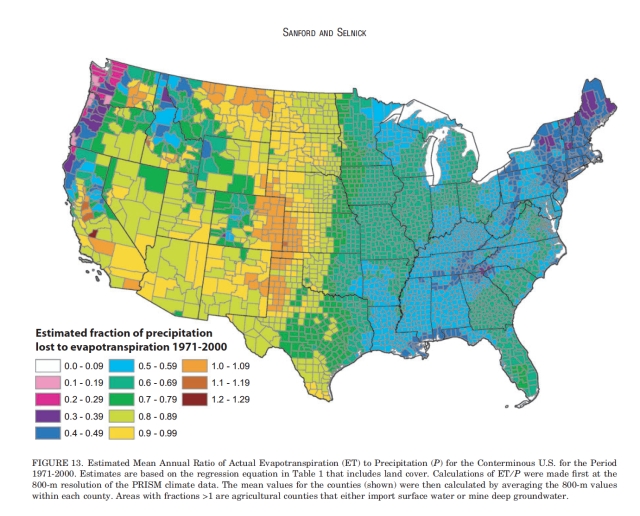 A better solution is to use a palette that avoids many of the problems of Rainbow. Matplotlib recently introduced the “Viridis” palette as its new default, Matlab introduced “Parula“, and you can easily use the viridis and viridislite packages for R. 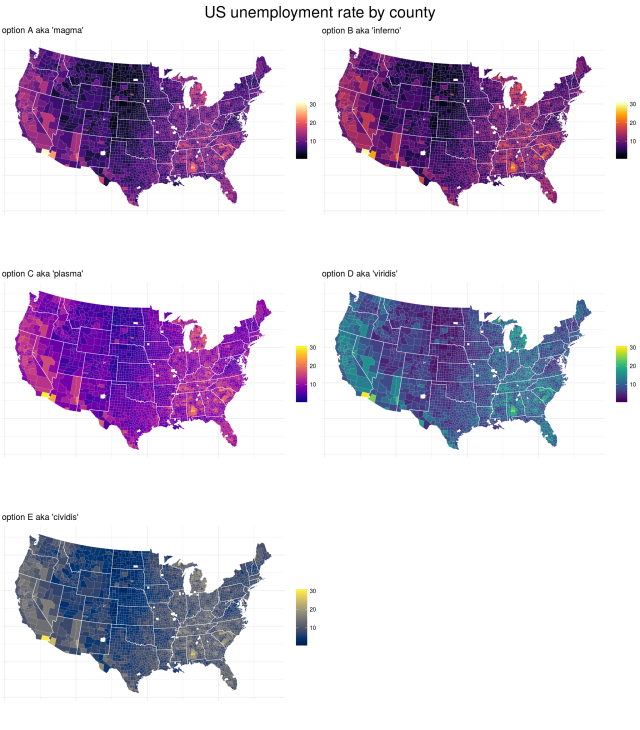 Maps made using the “viridis” package in R.

Colorbrewer has a useful set of palettes, including colourblind safe examples.

“The subtleties of color” by Rob Simmon is an excellent 6 part essay on use of colour in visualisation. Required reading.

This blog on #endrainbow has a great history section.

Advice on choosing colours in matplotlib.

The “background” section of this paper identifies lots of useful research for the effective and safe use of colour. Sherman-Morris, K., K. Antoneli, and C. Williams, 2014: Measuring the Effectiveness of the Graphical Communication of Hurricane Storm Surge Threat. Wea. Climate Soc. doi:10.1175/WCAS-D-13-00073.1, in press.

End of the Rainbow – an open letter by Hawkins et al.